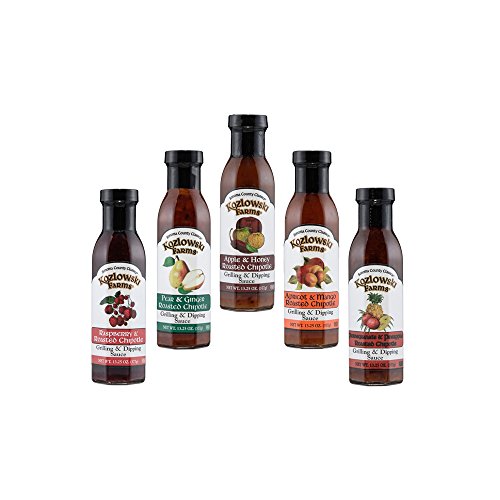 They decided to plant their picturesque Russian River Valley farm to juicy Gravenstein, Golden Delicious, Red Delicious and Red Rome apples. Knowing it would take seven years for the young trees to bear fruit, Carmen and Tony had the revolutionary idea of planting raspberries between the trees. They were also successful in cultivating blackberries, blueberries and cherries.

With so many beautiful berries for inspiration, Carmen was soon pursuing another of her passions: Baking and canning. At first, she made her jams and pastries just for family and Kozlowski farmhands. Then she started selling them at the entrance to the farm, and word of CarmenÕs irresistible wine country cooking spread.
Kozlowski Farms’ Amazing Grilling & Dipping Sauces
Kozlowski Farms is California Certified Organic Farmers (C.C.O.F) in Sonoma County.
Kosher KSA certified
Net Wt. 13.25 oz per bottle